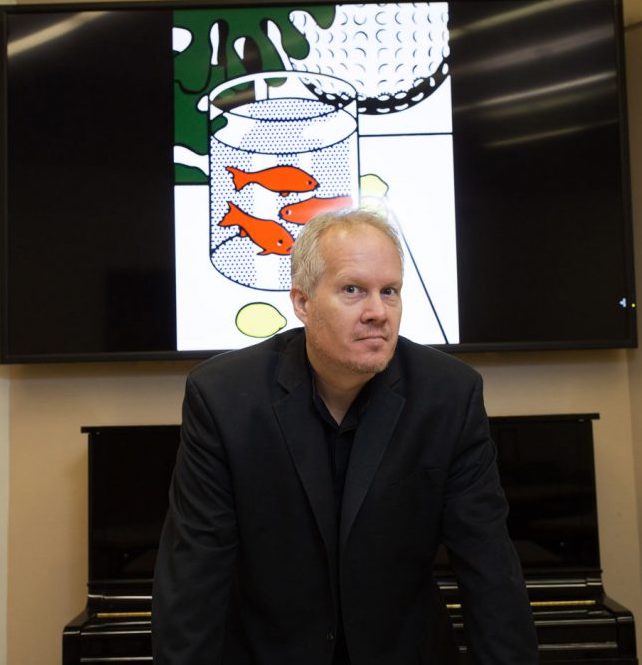 Kirk O’Riordan’s music has been referred to as “unapologetically beautiful” and is often praised for its uniquely “visual” qualities that depict a wide range of striking moods. His debut compact disk, Strange Flowers, was released by Ravello Records in November, 2013 and was praised by Audiophile Audition as “one of the most impressive and beautiful collections of chamber music I have heard in awhile….This is all just so lovely and invokes exactly the emotions that good music should be able to induce in all of us.” Gramophone Magazine praised O’Riordan as “a composer for whom imagery is a defining inspiration….[he] is a deeply sensitive composer who savours going gently into the night.” (April 2014).

HIs recording of his Twenty-Six Preludes for Solo Piano—by pianist Holly Roadfeldt—has attracted similar praise: “are similarly atmospheric and proceed to unfold like a magical tapestry. Each of the 26 Preludes seemingly comprising of warp and weft forming a myriad of pixels of little pictures that ultimately combines to form a moveable feast for both eye and inner ear. O’Riordan’s miniatures are informed by languorous beauty and profundity, the lyrical variations of each often feature elaborate embellishments, as well as sudden dissonant figurations that seem to mimic the gravity-defying leaps of the gazelle…” (World Music Report, April 2017).

Kirk is the recipient of numerous awards as both a composer and a performer, including annual ASCAPlus awards, a Composer’s Assistance Program grant from the American Music Center, the 2001 Arizona State University Composition Competition, the 2000 Contemporary Music Society competition, and an ERM-Media Masterworks Prize. In addition, his Cadenza for Piano Trio was one of two works selected by audience members at the CMS Mid-Atlantic/Northeast Super-regional Conference for performance at the 2008 CMS National Conference.

Kirk’s music has been broadcast on KBAQ, WQSU, and WVIA radio. Recordings of his works appear on the Ravello, Centaur, ERM-Media and EnF labels, and feature performances by Lawrence Stomberg, Marianne Gythfeldt, Holly Roadfeldt, Frederick L. Hemke, The Kiev Philharmonic, and Farrell Vernon. He has recently received commissions from AVIDduo, Saxton Rose, and Holly Roadfeldt. He recently completed his first opera: The Masque of Edgar Allan Poe, a one-act chamber opera based on Poe’s “Masque of the Red Death” on a libretto by Lafayette College colleague Lee Upton. The work was premiered by the University of Delaware Opera Theater in November, 2016 and subsequently at Lafayette College. Other projects have focused on music for dance: his River Lights for Orchestra (as recorded by the Kiev Philharmonic) was used by dancer/choreographer Ben Munisteri in his piece, Robot vs. Mermaid. O’Riordan has also collaborated with dancer/choreographers Carrie Rohman and Nandini Sikand. Recent projects include a concerto for Taiko Ensemble and Concert Band (for the Lafayette College Percussion Ensemble and Concert Band), incidental music for a Lafayette College Department of Theater production of Mary Zimmerman’s play Metamorphosis, and a new work for viola and piano for violist Michael Hall and pianist Holly Roadfeldt.

Dr. O’Riordan joined the faculty of Lafayette College in 2009, and now serves as Associate Professor of Music and Director of Bands, teaching courses in music theory, and composition. In addition, he teaches in the First Year Seminar program and conducts the Lafayette College Concert Band and Contemporary Music Ensemble. During his time at Lafayette, the Concert Band has been hailed for its ambitious and adventurous programming. LCCB released its first commercial recording, Blurred Days in May 2021–the CD is a collection of pieces written specifically for a ensemble that recorded remotely during the fall 2020 semester.

Prior to joining the Lafayette faculty, Kirk served on the faculties of Bucknell University and Susquehanna University where he taught music theory, composition, music appreciation, and (English) writing. He has also served on the faculties of Lock Haven University, Colorado Christian University, Chandler-Gilbert Community College, and Paradise Valley Community College. He holds the Doctor of Musical Arts degree from Arizona State University (the first recipient of that degree from ASU); the Certificate of Performance in Saxophone from Northwestern University; and three Master of Music degrees (composition, saxophone performance, and conducting).