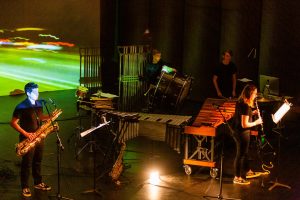 LCCME regularly incorporates electronics, improvisation, video, lighting, and theatrical elements into its programs. Recent projects include a micro opera on a student libretto, a live performance of a sound track to the silent film Nosferatu, and many premieres of student compositions.

The ensemble is directed by Kirk O’Riordan.

A micro-opera composed by the ensemble on a libretto by Ilana Goldstein ’19. The music is almost entirely improvised, and performers have speaking roles.

LCCME performed the soundtrack to the silent movie Nosferatu live during a screening at the Landis Theater in Buck Hall. This is the live performance synced to the film.

Avian Requiem is a program-length piece composed by the ensemble in commemoration of the 100th anniversary of the extinction of the Carrier Pigeon. This concert was part of a series of events organized by the Lafayette College Art Galleries.